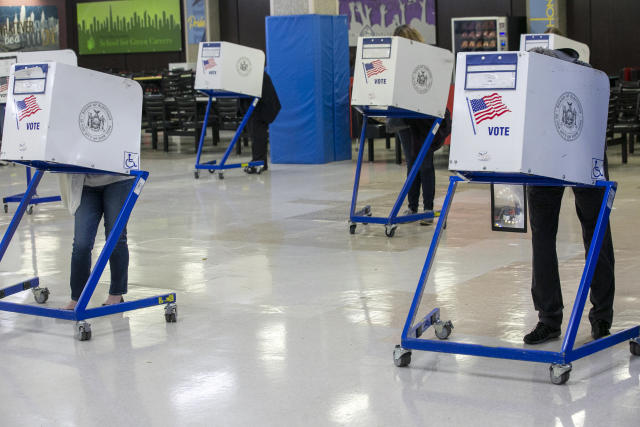 Voters’ approval of President Joe Biden remains deep in negative territory and 70 percent of voters say the country is on the wrong track — both results that bode ill for Democrats as Election Day approaches.

Fifty-five percent of registered voters said they disapprove of the job Biden is doing as president, and just 42 percent said they approve in the last POLITICO-Morning Consult poll conducted in advance of Tuesday’s election.

The poll continued to show economic issues at top of mind for voters, with 78 percent saying both the economy and inflation will play a “major role” in how they cast their ballots. By contrast, 61 percent of voters said crime would play a major role in their voting decisions this year and 57 percent said the same about abortion access.

The poll of 2,005 voters conducted from Nov. 4 to Nov. 5 has a margin of error of plus or minus 2 percentage points.

While most voters said they don’t believe the risk of political violence is increasing in their own states or local communities, 65 percent responded that they believe it has increased nationally. That majority includes more than 60 percent of Democrats, Republicans and independents.

The poll was conducted about one week after an assault on the husband of House Speaker Nancy Pelosi by an armed intruder, and most voters in the poll said they believed that the attack was an act of political violence. Sixty-three percent of respondents said they considered the attack either definitely or probably an act of political violence, while 21 percent said it definitely or probably was not a political attack.

There was a strong partisan divide between voters who considered the attack to be political in nature and those who didn’t: Sixty percent of Democrats said it was political while only 23 percent of Republicans agreed. Independents were closer to Republicans on this question, with 36 percent considering it an act of political violence.

Eighty-three percent of voters place the blame for political violence on the perpetrators themselves, but three-quarters of voters found fault with social media platforms, which have also faced scrutiny from members of Congress for their roles in helping people organize violent attacks and promote violent ideas.

Sixty-nine percent also blamed the news media, including 76 percent of Republicans and 64 percent of Democrats. And 55 percent of voters found television hosts and political commentators responsible for political violence, with blame falling equally on conservative and liberal TV personalities.

Former President Donald Trump was also found responsible for increased political violence by 58 percent of voters. Eighty-three percent of people who voted for Biden in 2020 blamed Trump as did 30 percent of his own 2020 voters.

← Prev: Musk pushes independents to vote Republican ahead of midterms Next: Biden closes the election with a big roll of the dice →