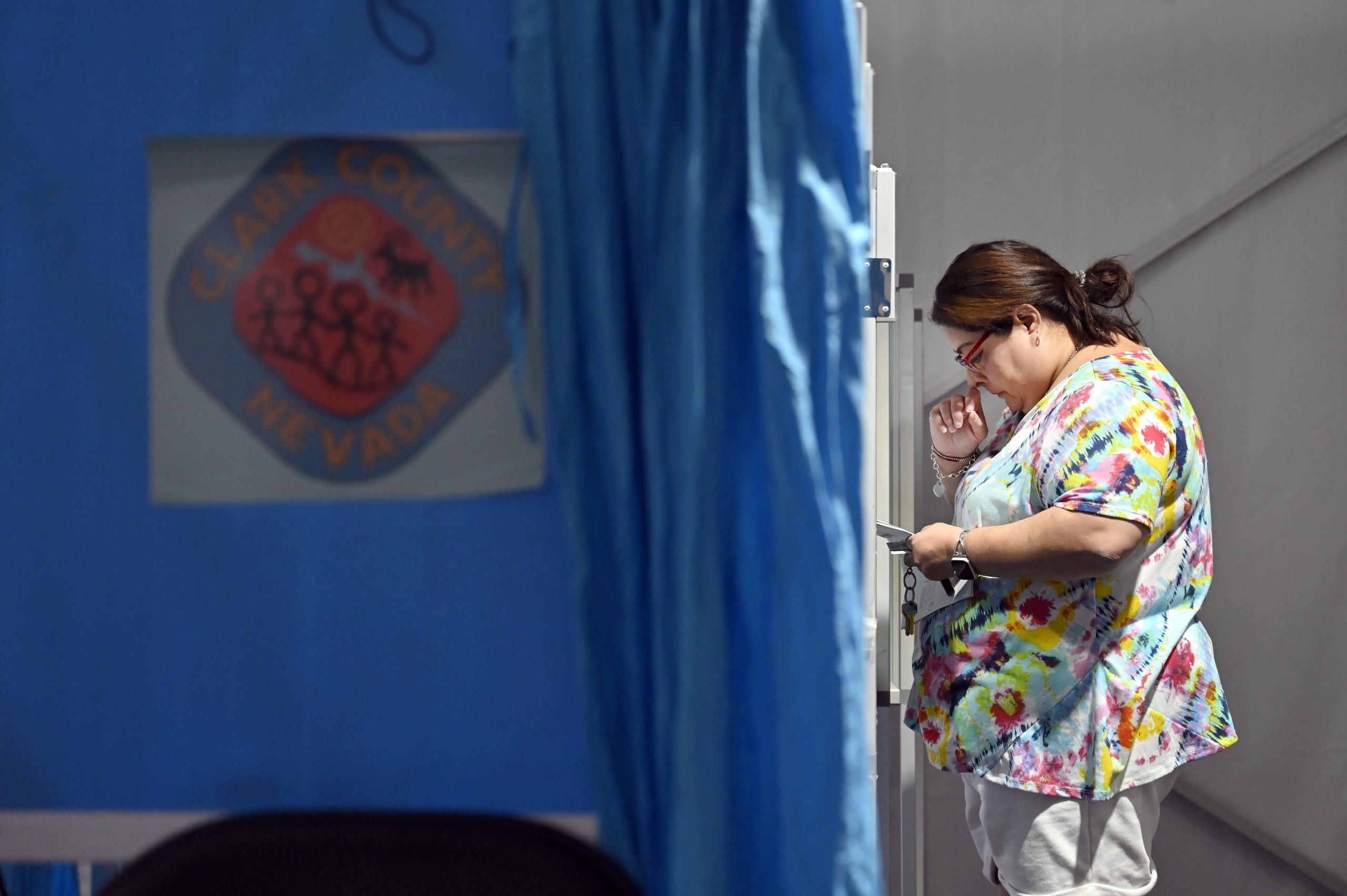 The Democratic National Committee is planning to pick up a big project after the midterm election: shaking up its presidential nominating process and changing the states that get to vote early. But a potential Republican wave on Tuesday could suddenly limit Democrats’ options for upending the primary calendar.

Sweeping legislative or statewide losses could jeopardize some state Democrats’ ability to reschedule their primaries to jump into the early-state window, like Michigan, or to compete for the first-in-the-nation primary, like Nevada. Without full or partial Democratic control of government, passing state legislation to change primary dates and overturn the existing early-state nominating lineup — the longtime quartet of Iowa, New Hampshire, Nevada and South Carolina — quickly gets more complicated.

Meanwhile, the party will have little time to calibrate for November results and how they would affect the logistics of changing primary dates. The DNC’s Rules and Bylaws committee will meet Dec. 1-3 in Washington, D.C., according to an email sent to members by the committee co-chairs. The members are expected to move forward a proposal for the 2024 primary calendar at the meeting, according to two sources familiar with the agenda, but it’s possible the vote could be delayed again.

“States still need to prove they can get it done. For some, now, that might be harder to do,” said one DNC committee member, who was granted anonymity to discuss internal deliberations candidly. The DNC’s decision to postpone the vote from August to December, the committee member acknowledged, “opened a whole different set of problems.”

The state with the most at risk is Nevada, where Democrats have lobbied aggressively to leapfrog from third to first place in the party’s presidential nominating calendar. They’ve argued that Nevada’s majority-minority population and size make it an ideal spot to launch future presidential campaigns.

But Democrats’ statewide leaders, Sen. Catherine Cortez Masto and Gov. Steve Sisolak, are locked in margin-of-error races against their Republican opponents, according to public polling. Democrats’ state legislative majorities could also be at risk, should Republicans enjoy a wave year.

Meanwhile, if Republican Jim Marchant wins his race for secretary of State, he could make it “impossible” for state Democrats to push Nevada ahead of Iowa and New Hampshire, said Cisco Aguilar, the Democratic nominee for secretary of State. Marchant is a leading proponent of the false claim that the 2020 election was stolen, but he could be the state’s chief election official in 2024.

That’s a serious worry for some DNC members, with one musing: “How could you have the first in the nation primary run by an election denier? That would be a problem.”

Others noted that Nevada’s election system is decentralized, with votes administered and tallied at the county level. Bradley Schrager, a Democratic elections lawyer in Nevada, described the secretary of state role as « largely ministerial and has no actual effect on the election results. » Nevada law says it must hold its primary on the first Tuesday of February, which is why changing it would require another law passed by the legislature and signed by the governor.

Sen. Jacky Rosen (D-Nev.), who has led the charge on Nevada’s efforts to go first in the 2024 primaries, insisted that regardless of the outcome next week, Nevada Democrats are still “all working on putting Nevada to be first in the nation.” If Democrats suffer significant losses in the state, she continued, “to me, it just reinforces Nevada’s case.”

“We’re still the number one battleground state in the country, and it doesn’t change our political makeup that we’re one of the most ethnically diverse states, rural, working class — I could go on and on,” Rosen told POLITICO in an October interview. Campaigning in Nevada, she added, would help candidates hear from different types of voters and “reflect on the kinds of things they need to do to win a presidency and be successful.”

« We are the clear choice on the merits, and there would be massive pushback if our party goes through this process but makes the self-inflicted mistake of elevating one of the least diverse and least representative states in the country over Nevada just because of their tradition, » Rep. Steven Horsford (D-Nev.) said in a statement. “The DNC and the White House have had months to figure out a plan, and the facts haven’t changed that there’s no state meeting every part of their own early window criteria better than Nevada. »

Some DNC members echoed Rosen and Horsford’s position: Nevada is “the best representation of the party’s base and the country as a whole,” said Maria Cardona, a DNC committeewoman. She also rejected the premise that there will be “big losses” in Nevada.

But others threw cold water on it. “I don’t think they’d have the clout or the juice to jump New Hampshire” if Democrats lose in Nevada this year, said another Rules and Bylaws Committee member. “Because if your argument is that Nevada is a great proving ground for Democratic candidates, but your incumbents can’t even get across the finish line, then you can’t make that argument as strongly. »

November won’t change everything as the DNC prepares for its latest deliberations. There is still consensus among most members and DNC leaders that Iowa cannot keep its first-in-the-nation status, a revered spot it’s held for decades. Criticisms of Iowa’s 2020 caucus debacle and its heavily white population prompted the DNC to reopen the presidential nominating calendar last spring.

So far, “the only thing it seems people can agree on is that Iowa shouldn’t be first,” said one Democratic operative familiar with the committee’s thinking.

But even Iowa could benefit from the post-midterm timeline for deciding the 2024 calendar.

“The more more uncertainty, the more chaos, the better for Iowa — and we’ve got a lot of both right now,” said Jeff Link, an Iowa-based Democratic strategist.

Link floated another wrinkle for the DNC, as it considers its options.

“If we hold the Senate and lose the House, probably, most likely, Biden runs for reelection, but if we lose everything, that might be in doubt,” he said. “Does the DNC really want an open nomination with a new calendar?”

Several other states are looking to gain early-state status, particularly Michigan and Minnesota, which are vying to replace Iowa for the Midwestern slot in the Democratic primary lineup. But there could be serious logistical challenges in each place, both before and potentially after the election.

In Michigan, changing the primary date would require a bill to pass through the Legislature and be signed by the governor, like in Nevada. But now, Democratic Gov. Gretchen Whitmer’s race for reelection has been tightening, while Republicans still maintain majorities in the state legislature.

Notably, a bill sponsored by a Republican state senator is already before a legislative committee in the state. That bill would move the state’s presidential primary election from March’s Super Tuesday to the second Tuesday in February in each presidential election year.

« Our focus is on Election Day. However, we have continued our work on this issue and believe we are in a strong position to hold one of the early primary slots, especially as the bipartisan support for this effort grows, » Rep. Debbie Dingell (D-Mich.), who has led the charge for her state’s bid, said in a statement. « It is critical that the early states are competitive in the general election and the reality is all roads to the presidency go through Michigan because it is one of the most competitive states in presidential politics. »

Minnesota doesn’t require legislative action to change the date, just agreement between the two party chairs. But Minnesota’s secretary of state race features another 2020 election denier, Republican Kim Crockett, and public polling shows Crockett and Democrat Steve Simon within just a few points of each other. Should Crockett win, Minnesota might find itself in a tough spot, explaining to DNC members how it can ensure voters easy access to the ballot. That was a recurring concern among DNC members earlier this year, when 18 states made their pitches to the committee.

Over the summer, several members highlighted Georgia as another state that could potentially slip into a fifth early spot in the 2024 calendar — a possibility the committee left open when it restarted the process. Georgia, as an emerging swing state, presented a compelling case to the committee, but it’s another state where the process of moving the primary is much more difficult unless Democrats gain power in state government.

Likely Democratic victories in a few states could improve their chances of moving up. Maryland, for example, is on track to elect its first Black governor, Democrat Wes Moore, replacing term-limited GOP Gov. Larry Hogan.

“As I’ve said to the president and others, you can go to all 24 jurisdictions and see a different part of America, and still go to sleep in your own bed,” said Maryland Democratic Party chair Yvette Lewis, who also serves on the Rules and Bylaws Committee. “We would not have the issue that other states are having [now], when they could go red.”

The whole process remains fraught with complication: It’s still not clear how unlinking the Democratic primary calendar from Republicans’ early-state order might work. The Republican National Committee voted to reaffirm its existing order — Iowa, New Hampshire, South Carolina and Nevada — last spring. Like the DNC, the RNC imposes delegate sanctions against states that try to cut ahead of their predetermined positions in the calendar.

Nevada, for its part, isn’t giving up. Horsford, locked in a tough reelection fight of his own, argued that losses in his state would prove that “this is a place we have to compete.”

“If anything, it means that this is a place where there’s room to grow,” he said.