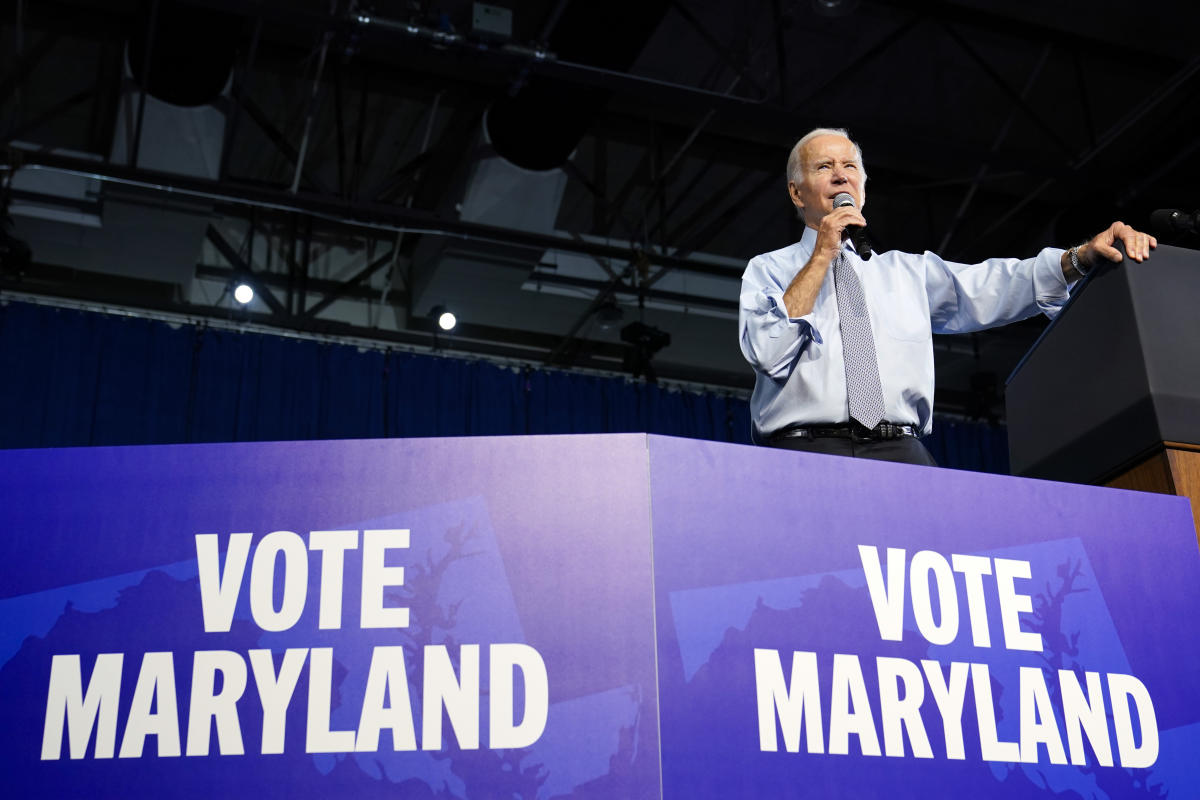 The trajectory of his presidency is on the ballot tomorrow and, as measured by his own words, the future of democracy, too.

But Joe Biden on Monday night stayed largely on script as part of his final plea to voters.

The speech, delivered in the neighboring blue state of Maryland, painted a grim illustration of America under Republican control, warning once more that American governance was under attack.

Biden brought the energy: the boisterous crowd of students, including a large cheer team and the concert choir representing the state’s oldest historically Black university, putting some pep in his step as he took the stage. But his words didn’t deviate much from his stump speech, which he worked through quickly.

“You’ve got one day until one of the most important elections,” Biden said. “Our lifetimes are going to be shaped by what happens in the next year to three years. It’s going to shape what the next couple decades look like.”

Rolling up his shirt sleeves, Biden rolled through the progress his administration has made on the economy, including an unmistakable shot at former President Donald Trump’s record in office. Biden concluded his 2022 midterm push in the state where he unofficially kicked off the Democrats’ push in late August, rallying for the party’s nominee for Maryland governor, Wes Moore. Back then, it would have been hard to imagine that the president’s final campaign destination would be in a deeply Democratic area, but the political winds have remained unfavorable for the White House in the midterm’s final weeks.

Vice President Kamala Harris, too, spent election eve on Democratic turf, campaigning Monday in her home state of California — another signal that frontline candidates wanted to keep their party’s standard-bearers at arm’s length.

The president, accompanied by first lady Jill Biden, delivered his final election message with an optimistic tone before what’s expected to be a rough night for his party, as forecasts project a House that leans Republican and a Senate up for potential GOP taking.

“Remember, the power is in your hands. You’re one of the reasons why I’ve never been more optimistic about America’s future,” the president said. “As I’ve traveled this country and the world, I see a great nation because I know we’re good people. We just have to remember who in the hell we are. We are the United States of America.”

In keeping with the theme of his campaign’s close, the president centered Monday night’s speech on both economic matters and threats to the nation’s democracy. Tuesday will be the first time Americans cast votes since the Jan. 6 attack on the Capitol, and Biden warned that democracy itself is on the ballot, a nod to the number of election-denying candidates who appear likely to win.

But he also sounded familiar notes focused on his administration’s accomplishments over the last two years, from massive infrastructure and climate and health spending bills to forgiving student debt, decriminalizing marijuana and appointing the first Black woman to serve on the Supreme Court.

While Biden has bristled at suggestions that he isn’t wanted on the trail, the president’s advisers have said repeatedly that they would dispatch him where he was invited and contended that the president was comfortable with that targeted role. On Monday, he used the speech as something of a capstone for a half-term marked by persistent doubts about his ability to deliver followed by legislative successes, however incremental.

Former President Donald Trump is also set to rally on politically safe turf in Dayton, Ohio, on Monday night with Republican J.D. Vance. Vance and Democrat Tim Ryan, who has distanced himself from his party, are in a tight battle for the Senate.

Chatter surfaced earlier Monday that Trump was considering announcing his 2024 presidential bid on election eve. It’s still not clear what Trump will do, and he’s notorious for stirring up suspense only to change course after consulting with advisers.

← Prev: Biden, Trump rally on safe turf on election eve Next: 13 Plants You Probably Shouldn’t Even Try to Grow Indoors →